How do detachable chair lifts work? 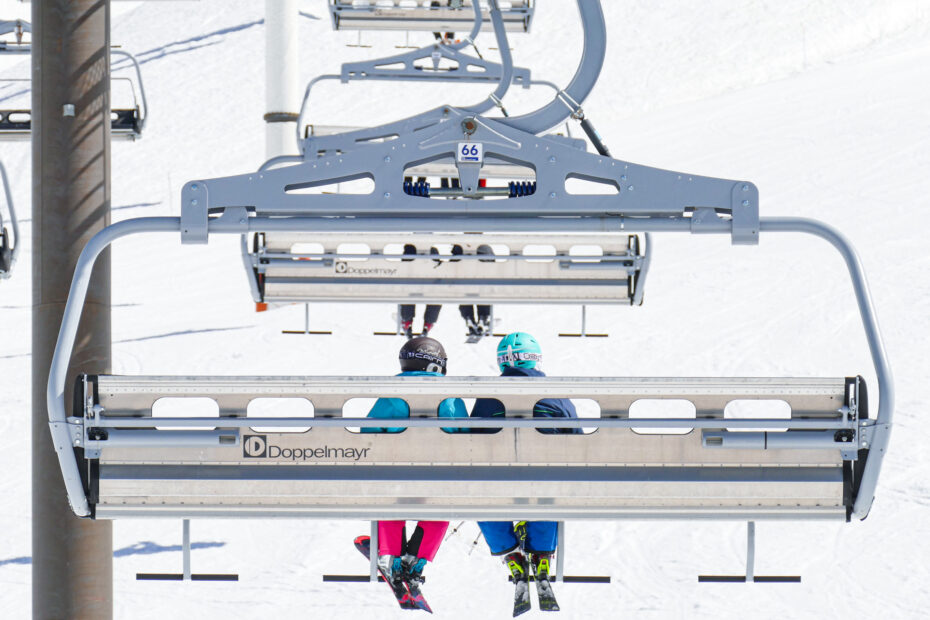 Whether it’s for singing at the top of your voice, enjoying panoramic views or swapping stories from the slopes, we all love chair lifts. These emblematic ski lifts allow us to sit comfortably while they whisk us effortlessly up to the summit. But how do chair lifts actually work?

For a better understanding, let’s go back in time, specifically, to 1936. Taking inspiration from a trolley system he’d invented for loading bunches of bananas onto ships in Panama, engineer James Curran invented the first chair lift. In the 1936/1937 season, these lifts were used for the first time in Sun Valley in the United States, then known as an Aerial Ski Tramway.

Back then, the lifts were single-seaters. With wooden seats and no protective bars, they only travelled at very low heights and had cables hardly any higher off the ground than a button lift. From 1940, chair lift production became industrialised. Pylons were standardised, allowing for higher journeys that could also span longer distances.

In France, it wasn’t until 1947 that the French civil engineering administration authorised the use of this kind of equipment. To begin with, the lifts were only used in the summer season. The first chair lift to be used for skiing in France was most likely the Aiguille Grive in Peisey in 1948.

Since then, chair lifts have gradually replaced button lifts across the ski areas, to everybody’s satisfaction. You really appreciate the difference when recovering between two downhill runs!

A chair lift is made up of two stations, one departure and one arrival, as well as pylons, a load-bearing cable, and chairs. Each chair is equipped with a “grip” that pinches the cable. Then, when the lift is in operation, the cable is pulled along by the motor in the station and the chairs are moved along the line.

If you wanted to load more skiers on at the top, you had two options: either increase the number of passengers per chair and/or increase the speed of the cable. However, it’s not hard to understand why at a certain speed, chair lift embarkation becomes tricky, if not completely impossible! That’s where the “detachable” technology comes into play.

The detachment allows the chairs to be separated from the load-bearing cable when they arrive at the stations. The grip opens and the cable continues to turn at full speed while the chair slows down. Skiers can then take their seats calmly and safely. Then the chair gradually accelerates to reach the same speed as the cable and once again attaches itself at the top.

A modern detachable chair lift increases the speed of the journey to 6 metres/second with 6 and some 8-seater chairs bringing the transportation rate to 4,800 people an hour.

What are today’s chair lift innovations?

Chair lift manufacturers are constantly innovating to make their product better at fulfilling skier needs. For even more comfort, we’ve seen the arrival of heated seats as well as protective bubble shields to protect from bad weather. To make things even safer, guardrails have been integrated with magnetic locking systems, as well as other additions specifically for child safety. Some ski lifts are even “connected” and offer Wi-Fi connection along the entire route!

La Plagne: Bécoin 6-seater detachable chair lift to take you to the stunning Etroits run at the heart of nature.

Val d’Isère: Fontaine Froide 6-seater detachable chair lift so you can challenge yourself on the Olympic downhill run, or follow in the tracks of racers from the Critérium de la Première Neige event.

previousHave a great weekend in the Grand Massif
nextA story that’ll have you dreaming of skiing, at any age…!